Hailing from the small Polish town of Leszno, The Bullseyes are on a living testament to the global language of rock music. The duo, made up of Darek on guitar and Matt on drums, is rapidly gaining fans around the world with a style that draws equally from vintage indie and futuristic production. The result is an urgent sound that speaks directly to the experience of the modern world.

Fittingly, the band’s logo is a simple bullseye, representing their high energy, straight to the point, no filler approach to music.

Self described as “optimistic nihilists,” The Bullseyes take a freewheeling, genre defiant approach to constructing their songs. Growing up together, the pair explored everything from prog infused metal to dance floor themed EDM before combining their powers to create what they call “neo-garage influenced rock.” Their first single came in 2017. Inspired by the duo’s punk rock ethos, it showcased the instantly memorable choruses and rapturous guitar solos that would later come to define their sound.
While the band hasn’t strayed far from that original formula, they have grown tighter and more professional over the years with a string of increasingly well received releases.
Like pioneering rock duos The White Stripes and The Black Keys before them, The Bullseyes prove that all a band needs for success is a great song and a passion for the craft. As standard bearers of fun, rebellious rock, they are committed to taking their music as far as it can go. “We’re just those two guys from Poland,” they explain. “but we can reach unreachable places with our music. That truly gets us going.”
Download HQ Press Photos

THE BEST OF THE BULLSEYES 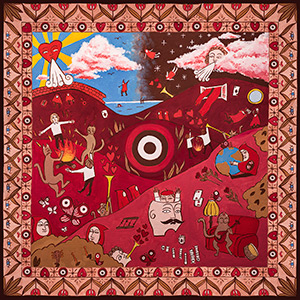 Polish rockers The Bullseyes have been steadily building a global following with their signature blend of vintage and futuristic rock for years. Over the course of nine well publicized singles, they’ve reached fans in just about every corner of the world. Now, with their cheekily named debut, they’ve collected those tracks, along with three previously unreleased songs to create a cohesive statement from one of the most exciting bands in international rock music.

The duo kicks open the door with album opener ‘World Doesn’t Care.’ Their signature attitude of nihilism meets optimism is amplified by a steady wall of ear catching riffs and thunderous percussion. The mix of psychedelia, blues, and pure pop rock is the perfect introduction to what the band is all about. Transitioning into the funky swagger of ‘Yet There’s You,’ they continue to pile as many memorable guitar melodies and vocal hooks as possible into each track.

The Bullsesyes show off another side of their artistry on standout track ‘Regular Sky.’ Starting as a Beatle-esque ballad, it builds into a mind bending guitar solo before climaxing with one of their most powerful choruses. All their influences are on display, from the garage rock revival of the 2000’s to the vintage records they grew up on.
The Bullseyes know that attention spans are short, and they need to command attention immediately to succeed. They also show a comic self awareness of the fact that they are capturing lightning in a bottle, explaining "We named our debut album “The Best of The Bullseyes” so you don’t need to wait 30 years to listen to “The Best Of…” album that will mostly be stuff from the first one anyway.”
If there is one song that fully captures the spirit of the band, it’s ‘Moment’s Arrival.’
“It's all about chasing after the great goal and the realization that it's better to never truly catch it.,” they say. Chasing the dream is what The Bullseyes do best, and with their debut record, they are closer than ever to capturing it.

Listen to
The Bullseyes

You can find us on every streaming platform.
Don't forget to follow if you like what you hear!